The ascension of Jesus 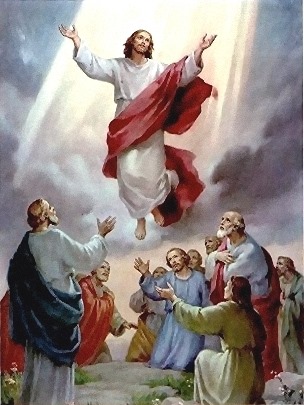 The ascension of Jesus (anglicized from the Vulgate Latin: ascensio Iesu, lit. ‘ascent of Jesus’) is the Christian teaching that Christ physically departed from Earth by rising into Heaven, in the presence of eleven of his apostles.[1] According to the New Testament narrative, the ascension occurred 40 days after the resurrection.[1] In the Christian tradition, reflected in the major Christian creeds and confessional statements, God exalted Jesus after his death,[2][3] raising him from the dead and taking him to Heaven, where Jesus took his seat at the right hand of God.[4]

In Christian art, the ascending Jesus is often shown blessing an earthly group below him, signifying the entire Church.[5] The Feast of the Ascension is celebrated on the 40th day of Easter, always a Thursday;[4] the Orthodox tradition has a different calendar up to a month later than in the Western tradition, and while the Anglican Communion continues to observe the feast, many Protestant churches have abandoned the observance.[6][7]

In Islam, Jesus was neither crucified nor raised from the dead, and according to the Qur’an, he was rather saved by God and raised to Heaven.[8]